The Evolution of Broadway! – Main Line Singers
Skip to content 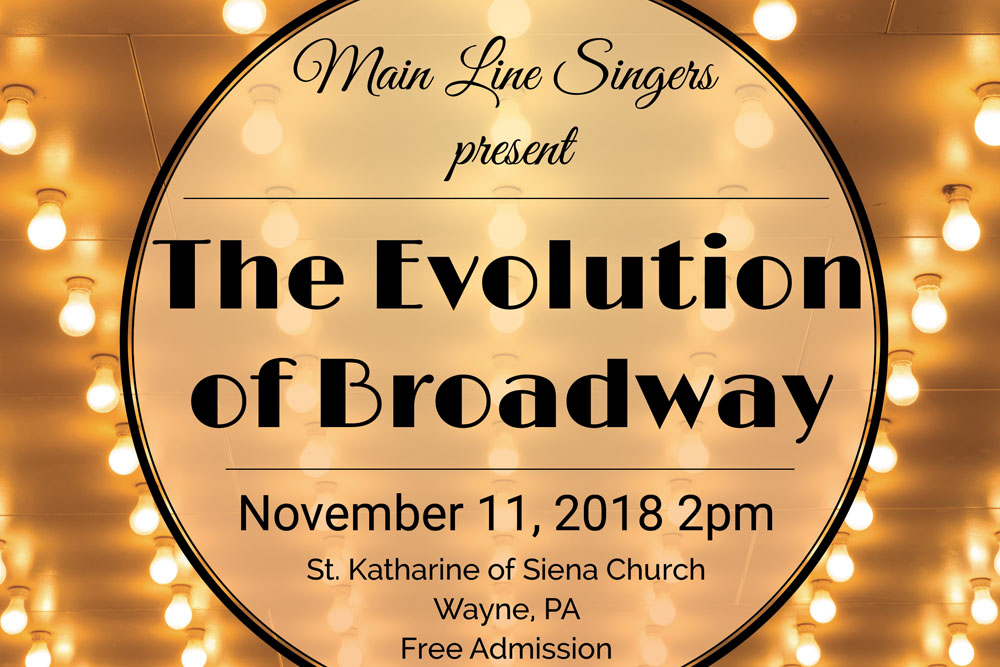 The Main Line Singers have been enthusiastically rehearsing the program to be presented on November 11th, 2018 at St. Katherine of Siena Church where we gather weekly on Wednesday evenings. Join us as we present a panorama of musical selections which span 81 years of Broadway Musical Theatre from 1936 (Anything Goes) to 2015 (Hamilton). The acoustics of St. Katharine’s are amazing, reverberating our voices into a surround-sound. The high, vaulted ceiling unifies our high and low notes into a harmonious complex melody. In this venue, it is a thrill to listen to amazing voices singing familiar, beloved and even unfamiliar Broadway Show tunes.

The chorus, our ensemble and solo voices will be performing a variety of selections. Songs such as “In My Own Little Corner” from Cinderella and “Defying Gravity” from Wicked (based on The Wizard of Oz) tell about the hopes and dreams of the character derived from each fictional story. We will be singing a medley of songs from West Side Story and My Fair Lady including an individual selection, “Seasons of Love” from the show Rent. The plots of each of these shows are a modernization of classic stories: Shakespeare’s Romeo and Juliet, Pygmalion by George Bernard Shaw and Puccini’s La Boheme.

Some of our selections use the sound of the words and the interaction of the voice parts to express the meaning of the song. In “Pickalittle (Talk-a-Little)” from Music Man, the women are gossiping and sound like chickens “clucking away” while, in contrast, the men sing a slow, lyrical song. “A Bushel and a Peck” from Guys and Dolls is a bouncy song with flirty gestures and inter-coordinated voice parts. “My Favorite Things” from the musical The Sound of Music uses choppy, rhyming words that create a rhythmic-beat and a feeling of excitement. “Anything You Can Do” from Annie Get Your Gun, a one-up argument between two competing lovers, is sung as a vocal dual among parts.

A few of our songs are derived from Broadway shows which deal with serious subjects such as AIDS, death and the limitation of time. Falsettoland is a musical in which the characters cope with complex issues of marriage, homosexuality, AIDS and death. In the emotionally-moving song “Holding to the Ground,” a wife reflects on her ambivalent feelings toward her husband. In Godspell, based on the gospel of Matthew, Jesus persuades his followers that tough times are “All for the Best”. The characters in the show Rent are all impacted by the AIDS crisis. “Seasons of Love” and “Who Lives, Who Dies, Who Tells Your Story” from Hamilton are songs about the importance of using one’s time wisely: to love, accomplish meaningful goals and be favorably remembered.

“Love Changes Everything” is the defining song from a little-known Broadway show, Aspects of Love. In a way, the title of this song defines the essence of the musicals from which our songs have been selected. We are looking forward to presenting these selections to you. Our love of Musical Theatre is infectious. See you at our concert on November 11th!

Agenda: SECTIONALS! It’s Only a Paper Moon, Here Comes the Sun, Dream a Little Dream of Me

Agenda: It’s Only a Paper Moon, Here Comes the Sun, Dream a Little Dream of Me

Agenda: It’s Only a Paper Moon, Here Comes the Sun, Dream a Little Dream of Me